“Life is either a daring adventure or nothing at all.” – Helen Keller

Popular India Travel Packages include a travel package combined with the golden triangle along with a most popular religious place Varanasi. Such package brings in the best value for money, which is important for every traveler. Popular India Holiday Tour Packages comprises of a package, which is suitable according to every tourist’s budget and taste. The India travel package usually starts from Delhi and goes all the way to the luxurious Rajasthan and Agra. 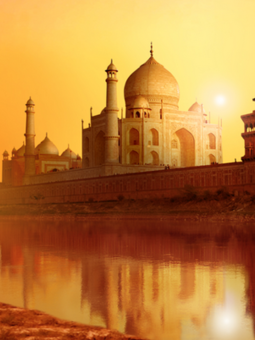 view all experiences
Day 01 : Arrive in Delhi. Excursion the monuments of Delhi

On reaching Delhi, you will be greeted by us and will be taken for hotel check-in. Delhi, an ancient city was once the capital town of Indraprastha and the Pandavas during the times of Mahabharata. Since many rulers came and ruled in Delhi, the culture of Delhi has been influenced by diverse rulers, thus is a home for some of the most beautiful monuments. The Mughal rulers had a deep impact on the food habits of the citizens of Delhi and Mughlai cuisine forms an important part of the Indian cuisine. As all the states are in close vicinity, nearly all the festivals are celebrated here. Delhi is the capital city of India and is the centre for politics ever since its independence.

The tour of Delhi begins in the morning. The city was built by Shah Jahan, the Mughal emperor in the year 1639 AD. You will be first escorted to the Raj Ghat, the cremation ground of Mahatma Gandhi, father of the nation. After this you can visit the museum that was constructed to honor him. You can drive across the famous Red Fort and busy market of Delhi, Chandini Chowk. Your next halt will be Jama Masjid, which is one of the largest mosques of India constructed by emperor Shah Jahan. A ride in a rickshaw in the by lanes of Chandini Chowk would be very interesting. Chandini Chowk is the hub for roadside mouthwatering food, wholesale market for clothes, jewels, dry fruits, household items, etc. and is a famous shopper’s paradise.

Later in the afternoon, you will be visiting Qutub Minar, a world heritage site and the largest minaret. It was constructed by Qutub-Ud-Din Aibak, a Turkish ruler. Move ahead to the Humayun’s tomb and your next halt will be India Gate, a war memorial built in the memory of the soldiers, who laid their lives for the country. Drive past the Secretarial buildings, Parliament House, Rashtrapati Bhawan, the official residence of the President. Your final destination will be a shrine dedicated to Lakshmi and Lord Narayana, Lakshmi Narayan Temple. Night stay will be in the hotel in Delhi.

Next morning on day 2 you will drive down to Jaipur. Jaipur, also famous as 'the pink city' of India is the first planned town in the country. It is popular for its forts, palaces and awe-inspiring design and planning. Long ago, Prince of Wales visited Jaipur and the whole city was decorated in pink color. Owing to these pink buildings, the town is acknowledged as the pink city. Maharaja Jai Singh laid the foundation of Jaipur some 260 years ago and is one of the most happening cities in the state of Rajasthan. The remaining day can be spent visiting vibrant Jaipur bazaars or strolling through the crowded colorful markets. The vehicle will be at your disposal and you can visit any place within the city like restaurants or any place of attraction. Night stay will be in Jaipur.

Day 03: Excursion the monuments of Jaipur and Amer fort

On the 3rd day your sightseeing tour of Jaipur begins from Amer fort, which was in earlier times the capital of Jaipur. This outstanding fort is built in marble and sandstone by Raja Man Singh, which is segregated in four parts along with the courtyard. The chief entrance also famous as Surajpol has mesmerizing architecture. Very close to the Ganesh Gate is a temple devoted to the deity Sila Devi. The hall where public resided-Diwan-e-Aam, private hall called Diwan-e-Khas, Palace of mirrors-Sheesh Mahal and Sukh Niwas form an integral part of Amer Fort. Sukh Niwas is especially famous for its pleasing climate that blows over a water cascade. You can reach the fort by walking or enjoy an elephant ride and even in jeeps.

After this you can proceed to the City Palace, a majestic palace and Jantar Mantar, which is an observatory. Mathematicians and astronomers throng this observatory from all across the world. City palace is an amazing amalgamation of Mughal, Rajput and European architecture. Another important destination that is worth a visit in Jaipur is Hawa Mahal and is well known for its splendid architecture. You will drive past the business centers and Rose Garden in Jaipur. Trip to Jaipur will not be complete till the time you visit the markets of Jaipur. Jaipur is renowned for clothes, semi-precious stones, Kundan jewelry, carpets and a variety of handicrafts created out of wood, metals, etc. Silk paintings, Bandhini material, odhinis and miniatures are a good purchase in Jaipur. Night stay will be in the Jaipur hotel.

On the 4th morning you will drive down to Agra from Jaipur via Fatehpur Sikri, which was the capital city of Emperor Akbar in the earlier century. Fatehpur Sikri is known for its incredible architecture, represents Mughal planning and is a famous World Heritage Site. People soon migrated from this place owing to the scarcity of water. Today it is an abandoned city. Here you will come across Jama Masjid, Tomb of Salim Chishti, the 5 storey Panch Mahal and an exceptional Buland Darwaza, a stunning piece of extraordinary architecture. There is a portico in the center along with 3 arched entrances and the locals call it a Horseshoe gate. Some other places of attraction at Fatehpur Sikri are Ibadat Khana, Naubat Khana, Mariam-uz-Zamani's palace and Birbal’s house. From here you can move to Agra, check in the hotel and evening is at leisure. You have transport at your disposal and you can go anywhere within the city. Night stay will be in the Agra Hotel.

Day 05: Excursion the monuments of Agra

Agra, also famous as the romantic city is situated on the banks of the River Yamuna. Agra is a well-known tourist destination in the country and people from different parts of the world throng this city all round the year. It is an integral part of the Golden Triangle circuit with Delhi and Jaipur. Agra is famous for Taj Mahal, a monument made out of pure white marble with crystals, gems and multi-colored stones engraved on the walls of the monument. It was constructed by the Mughal Emperor, Shah Jahan for his wife Mumtaz Mahal, whom he loved dearly. You will be taken to visit this historical monument in the morning and you can witness the undying beauty of this beautiful mausoleum. Standing imposingly on banks of Yamuna River, this awe-inspiring, enormously attractive monument, is the symbol of true love.

From here you can move on to the Agra Fort, which is again a World Heritage Site and is famous for its architectural designing. It was constructed in the 16th Century and some of the places worth visiting within the premises are Jahangir Palace and Khas Mahal. Diwan-e-Aam(public hall) and Diwan-e-Khas(private hall) are a part of this. In the afternoon you can see some more places of attraction or can also enjoy shopping, as it is completely at your discretion. Agra is well-known for marble work pieces and handicrafts that are created out of wood and metal. The transport is forever at your disposal and you can travel anywhere in the city. Night stay will be at the hotel in Agra. Please note that TAJ MAHAL IS CLOSED ON FRIDAYS.

Day 06: Drive from Agra to Delhi and then fly to Varanasi

On the 6th day of your trip, you will move back to Delhi to take a flight to Varanasi. On reaching Varanasi, you will be taken to the hotel for check-in. The remaining day will be at leisure or you can discover the bi-lanes of Varanasi or make a visit to Sarnath. One thing that should not be missed, when you are in Varanasi is the evening Arti at the bank of River Ganga. This aarti at the Ganga Ghat is a must watch. Varanasi is among the oldest city on this planet and dates back to at least 5000 years. It is the sacred town of Hindus and North India’s spiritual capital. It is a belief that death in Varanasi can lead to Salvation(Mukti). The city of temples, Varanasi was once the famous seat of learning. Night stay will be in the hotel in Varanasi.

Day 07: Excursion the monuments of Varanasi

Next morning you will be taken for a boat ride on the river Ganges and you can glide through the river to the different ghats of Varanasi. Some of the most popular ghats of Varanasi are Harishchandra and Manikarnika Ghats and devotees from all across the world visit them to take a holy dip. They are also the cremation grounds and you can witness many funeral pyres on these ghats. In the afternoon, you can visit Deer Park at Sarnath, the destination where Lord Buddha gave his first sermon after he attained enlightenment and it was here that he gave lectures on the four noble truths. Night stay will be at the hotel in Varanasi.

Day 08: Fly Back from Varanasi to Delhi and Departure

On the 8th day of your trip, you will be transferred to the air terminal of Varanasi to take a flight back to Delhi. From there you can depart for your onward destination and take home some beautiful memories, which you will cherish all your life.