India is a vast country with unimaginable diversity, from North to South and from East to West you can see diverse culture, practices, language and food everywhere. The uniqueness of the country is its diversity and its capacity to continue to unify with the same. From lofty Himalayan peaks to oceanic coastlines and from ancient temples to modern day architecture everything is alluring. People of different castes and communities live here in harmony, though there are rifts among them sometimes, but the majority of the time you can see an amiable environment. Tourists come to India from all the parts of the world and therefore tourism is one of the biggest revenue generator in the country. Your 11 days Cultural Indian Travel Package includes your introduction to many different cities and states of the country. Starting from New Delhi to Rajasthan, Madhya Pradesh and Uttar Pradesh, the tour covers significant parts of the country. 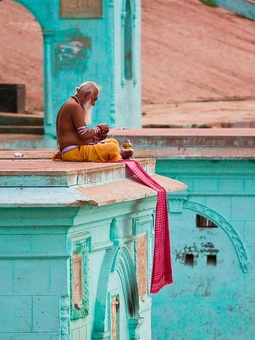 view all experiences
Day 01 : Arrive in Delhi. Sightseeing of Delhi

Your 11 Days Cultural Indian Travel Package will start from New Delhi, the city that is special in many ways and was built by the Mughal Emperor. Delhi has many places of tourist attraction and your tour will start from Old Delhi where you can visit the iconic Red Fort and other places as well. You will also be taken to Raj Ghat, the crematory of Mahatma Gandhi, where you can also see the museum commemorated to him. You can take a rickshaw ride in Chandini Chowk and see this very popular market of Delhi. You can visit the Jama Masjid and the Sheesh Ganj Gurudwara. Chandini Chowk is also very famous for food so you can enjoy some local delicacies of Delhi over here. During the later part of the day you can visit the Qutub Minar, a UNESCO World Heritage Site, the Humayun’s Tomb and India Gate. You will later be driven past the President’s House and the Parliament of India. Your final destination will be Swaminarayan Temple, a beautiful piece of architecture dedicated to Lord Swaminarayan. The overnight stay will be in Delhi.

Day 02: Drive from Delhi to Jaipur

This morning you will be taken from Delhi to Jaipur by road. Jaipur is the capital city of Rajasthan therefore it is very important. The city is also the home to the royal family of Jaipur and flaunts some of the massive architectures, museums, gardens and palaces. Jaipur is popularly known as “The Pink City” and attracts tourists in large numbers. The city was built by Maharaja Jai Singh and here you can see the uniqueness everywhere. The city has colorful markets so you can spend the day walking around in the streets of Jaipur. The transport will be at your disposal and the overnight stay will be in Jaipur.

Your sightseeing tour in Jaipur start on this day and you will first be taken to the Amer Palace, this magnificent palace is built on the hilltop where you can reach on an elephant or a car. The fort is constructed in red sandstone and is known for its fascinating architecture. There is a Ganesh Gate in the fort near which, there is a temple dedicated to the Goddess Sila Devi. The other attractions of this fort are the Diwan-e-Khas - hall of private audience, Diwan-e-Aam - hall of public audience, Sukh Niwas and the Sheesh Mahal. In Jaipur, you will also visit the City Palace, Jantar Mantar, Rose garden and Hawa Mahal. Since the city is famous for the precious and semi-precious gemstones you can look for them over here. Overnight stay will be in the city.

Day 04: Drive from Jaipur to Agra Via Fatehpur Sikri

This morning, you will be taken from Jaipur to Agra via Fatehpur Sikri, the city is known to bet an extraordinary testimony to Mughal civilization and is one of the well-known UNESCO World heritage sites of India. Here you can visit the Jama Masjid and the tomb of Salim Chishti and Ibadat Khana. Later you will be taken to Agra and the overnight stay will be in Agra.

Agra has formerly been the capital of India and is located on the banks of river Yamuna. This is one of the most preferred tourist destination and people from all over the world come to Agra to see the iconic Taj Mahal. Agra was also known as Akbarabad after the name of the famous Mughal ruler, Akbar. You will visit the Taj Mahal in the afternoon, the mausoleum is made up of white marble and the use of organic dye has been done to make designs on the walls of the Taj Mahal. After visiting the Taj Mahal you will next be taken to the Agra Fort, a 16th century monument, which is also a UNESCO World Heritage Site. Afternoon can also be spent in doing shopping and visiting other places of interest.

Day 06: Drive from Agra to Gwalior. Sightseeing of Gwalior

After Agra you will be transferred to Gwalior by road and later be taken to the hotel. Gwalior is known for sacred temples, palaces and other glorious monuments. In the afternoon you will be taken to the Man Mandir and later to Teli Ka Mandir and Sas-bahu Temple. You can also visit the grand Jai Vilas Palace in Gwalior. This is a European style palace, which has now been transformed into a museum. The Overnight stay will be in Gwalior.

Day 07: Drive from Gwalior to Orchha. Sightseeing of Orchha

From Gwalior you will be transferred to Orchha, the town which was established by Rudra Pratap Singh in the 15th century AD. Here you can visit the famous Orchha Fort and other architectural monuments like Raja Mahal, Raj Mandir, Jahangir Mahal, and Chaturbhuj Temple. In order to get the beautiful view of Orccha you can climb up the roof of a camel shelter, which is known as "Uth Khana". The overnight stay will be in Orchha.

Day 08: Drive from Orchha to Khajuraho. Sightseeing of Khajuraho

Next morning after breakfast you will be taken to Khajuraho, where upon your arrival you can check-in at the hotel, rest for some time and later leave for sightseeing. The city is known for erotic and exemplary temples, which were constructed by the Chandela Rulers during the tenth and eleventh century. During the sightseeing in Khajuraho you will be taken to the temples of the Chaunset Yogini Kali Mandir, Chitragupta temple, Lakshmana Temple, Shiva Temple, Nandi and Vishvanath Temple and to the Parasvanath temple, which is the only Jain temple that exists. You can also visit the Lord Adinath Temple and Javeri Temple. Overnight stay is in Khajuraho.

Day 09: Fly from Khajuraho to Varanasi

This day you will be taken to the airport to board the flight for the famous holy city of the Hindus, Varanasi. After arriving in Varanasi you will be taken to the hotel and the rest of the day will be at leisure and you can go to Sarnath. In the leisure time, you can take a stroll on the ghats of Ganga and visit the bazaars of Varanasi. Since this is known one of the oldest living cities in the world, you can really have some enchanting experiences here. It is known as the city of temples so you can have a chance to visit many temples here. The overnight stay will be in a hotel in Varanasi.

Your morning will start with the boat excursion on the river Ganges, you will be mesmerized to see the beautiful view of sunrise at that hour of the day. You will be taken to the different ghats and you can also see the most famous Manikarnika ghat and the Harishchandra ghat, which are thronged by hundreds of devotees. These ghats are popular for conducting cremation ceremony, people from different parts of the country come to cremate the ashes of their loved ones who have left for their heavenly abode. Your afternoon will be at leisure and the overnight stay will be in Varanasi.

Day 11: Fly from Varanasi to Delhi

On your last day of Culture of India Travel Package you will be transferred to the airport to take the flight for Delhi. After reaching Delhi you will take the connecting flight to your respective destination. Since most of the flights depart at midnight therefore no accommodation is arranged for this day. Your 11 days Culture of India Travel Package tour thus comes to an end.