These are the must visit spots to experience Indian roots. This package will make you explore the religoius sites of Bhubaneshwar & Puri. It will not only be a religious experience but a cultural journey of Indian food, craft and hospitality. 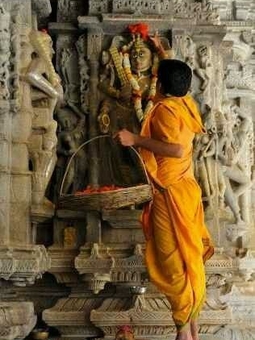 On your arrival in Bhubaneshwar, you will be transferred to your hotel. Bhubaneshwar is the capital of Odisha and has a history of over 3,000 years. Bhubaneswar gets its name from Tribhubaneswar, meaning the Lord Shiva who is the Lord of the Three World and was mentioned during the Kalinga War where Emperor Ashoka was shocked with the brutalities of war and shifted to Buddhism. Bhubaneswar known as the Temple City of India had over a thousand temples and some of the important temples are Lingered Temple, Muktesvara Temple, Rajarani Temple, and Ananta Vasudeva Temple.

In Khandagiri & Udayagiri, carved into cave-like chambers in the hill is a Jain temple with inscriptions from the 2nd century BC giving an account of that period. Edicts of Emperor Ashoka, from 272 to 236 BC are carved in rock 8 kms away. Most of the temples built between 7th to 11th century are of Shiva. Ananta Vasudeva Temple and Bindusagar Tank are one of the few Vishnu temples. A tour of Bhubaneshwar Konark Puri is known as the Golden Triangle Tour of East India.

Bhubaneswar due to the Oriya cinema industry is called as dubbed 'Ollywood'. The world famous Odissi classical dance originated from this place. Odissi is the oldest classical dance forms of India and can be traced to the ancient temples. The State Museum houses artifacts, weapons and local arts and crafts. A visit to the Nandankanan Zoological Park is quite interesting. The botanical garden has a good collection of exotic and regional fauna. Bhubaneshwar is a base to for excursions to the tribal areas. Rest of the day is at leisure. Overnight in Bhubaneshwar.

Day 02: Bhubaneshwar to Konark to Puri

Today morning, you will be transferred by road from Bhubaneshwar to Konark, which is famous for its Sun Temple of 13th century or the Black Pagoda as it was built in black granite. The name Konark comes from the Sanskrit words Kona (angle) and Arka (Sun) and is dedicated to Surya, the Sun God. The Temple is designed as a huge chariot of the Surya with twelve pairs of wheels, some of them 3 meters wide and pulled by seven horses. The temple which is in ruins is a World Heritage Site. Konark is home to the Konark Dance Festival devoted to the classical Indian dance forms, including Odissi. After the visit of Konark, you will proceed to Puri. Rest of the day is at leisure. Overnight in Puri.

You have a day free in Puri to discover this religious town. Puri is one of the holiest places for Hindus and has many names like Jagannath Puri, Srikshetra, Shankhakshetra, Purusottama Puri, Neelachala, Neeladri, etc. Every Hindu would like to make a pilgrimage tour to four temples towns at least once in his life and Puri is one of them and the other three are Badrinath, Dwarika and Rameshwaram. Puri has one of the four Mathas (Hindu monastery) established by Adi Shankaracharya. The others are at Jyotirmath, Sringeri and Dwarika. The Jagannath Temple is closed for non-Hindus. Overnight in Puri.